There was an op-ed posted on The New York Times’ website entitled “How Genetics is Changing our Understanding of ‘Race'”. Written  by David Reich, the piece talked about such things as race and IQ, and how there are differences in genetics between different groups of people that might make them different than other groups of people. The biggest idea is that a person’s race has an effect on their IQ. This is a belief that has been debunked before because it does not hold any real science.

There was then an article on Slate talking about the original article which said that David Reich was trying to bring up dangerous science that has been disproved numerous times. The author of the Slate article talked about how he was once a geneticist who fell into the trap of believing that IQ and race went hand in hand but eventually realized there was no scientific facts to back it up.

You see talk like this in certain parts of the world. This is only an example and is not necessarily true in any way, but take the idea of a white southern male who has racist views. He might believe that black people are lazy and dumb simply because of the color of their skin. This holds no weight because that is not how race and character traits work. On the other hand the black person might view the southern white male as being dumb and ignorant because he is a white person living in the south. These stereotype people have are dangerous to have because they are not backed up by scientific evidence.

This idea that race has an impact on a person’s IQ is something that has been used in historical cases with the biggest example being WWII and Hitler’s extermination of the Jewish people. His belief that simply because they were Jewish meant they were inferior led to one of the largest genocides in history. We cannot allow these dangerous beliefs to rise into main stream science and into the everyday persons thoughts because it could lead to something dangerous for us all.

Here is the link to the New York Times’ :https://www.nytimes.com/2018/03/23/opinion/sunday/genetics-race.html

Here is the link to Slate’s article: https://slate.com/news-and-politics/2018/04/stop-talking-about-race-and-iq-take-it-from-someone-who-did.html 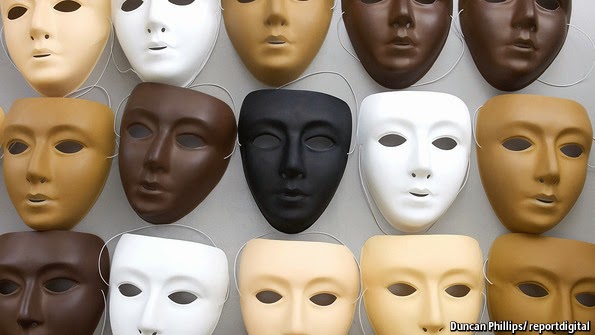 Has there ever been a time when you looked at someone differently because of their race? It is probably something we are all guilty of. Even though a large portion of us mean no harm, there are people that judge other purely based on race, and are very judgmental and hurtful when doing so. What if all of that could be eliminated? This world may be a much better place to live in.

In an article from Pacific Standard researchers decided to use virtual realities to try and reduce racial bias in people. This was all done by a research team led by Mel Slater and Tabitha Peck. They recruited 60 female college students, all light-skinned. The participants were asked to take the Implicit Association Test. This was done to bring to light any unconscious racial prejudice. The participants were then asked to leave the lab. Upon their return to the lab they entered their virtual realities. They did this by wearing a suit with sensors. In the virtual realities the participants would look into a mirror, and the reflection would show the participant as dark skinned, light skinned, or purple skinned. The research found that only participants made dark-skinned had a significant decrease in implicit racial bias. This particular study was also published in the journal Consciousness and Cognition.

A similar study was done, and the findings were very similar as well. This study was titled Experiencing ownership over a dark-skinned body reduces implicit racial bias. It can be found in Science Direct. This study argues that a certain areas of the brain activate when we see someone else’s bodily state, like their skin color. When we have the same body state as someone else the regions in the brain tend not to activate. The study calls these multiple reacting regions in the brain “mirror neuron systems”. The study also explains a recent EEG study on the subject. The EEG study found that participants observing action of someone not in their racial group would have low activation in the motor cortex. When the participant observed someone in their racial group performing some sort of action the same participants have activation in the motor cortex. These variations are also true not only when a participants just sees a person of a different race, but there are also differences if they see the other person in pain. Another study has been done showing that when a person sees someone of the same race in pain they have brain reactions as if they were experiencing pain themselves. If the person sees someone of a different race they tend to have no brain reaction.

These studies believe they can give us a very uncommon first-person account of others experiences, and how we truly see others that have different outside appearances. This is something that is not usually done. If we can somehow see what others see and why they react a certain way, we can maybe change that person negative reaction or make them aware they are even reacting in such a way.