In our discussion of language, I was very much intrigued by how people learn languages. I was in particular curious as to why it is easier for some people to learn more languages than others. When thinking of this I was not thinking in terms of age in correlation to language acquisition, but rather to how people in general, within the critical period of language acquisition, managed to differ so greatly in ability. Being profoundly deaf myself, my thoughts then turned to deaf people. I had often wondered if there were any benefits to learning American Sign Language at an early age – my research thus turned to looking at people that had learned ASL at an early age as opposed to people that had not, and comparing their ability to learn new languages. 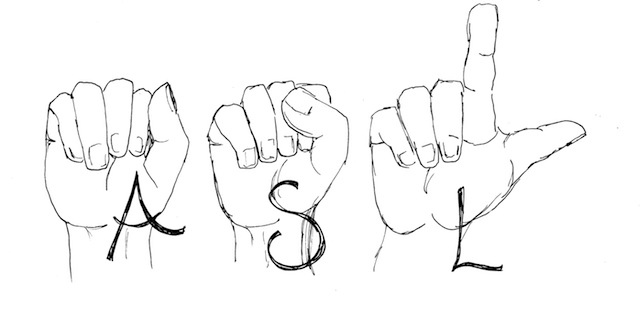 As I looked at all the research, I was intrigued to see how in consensus everyone seemed to be. Never have I come across a field of research that has such a profound unity in conclusions. I am glad to say that it is indeed true that those that are exposed to language at an early age are indeed endowed with better language acquisition skills. This study, as well as every single other one I have come across, states that “the outcome of language acquisition is not uniform over the lifespan but rather is best during early childhood.” As every Psychology major knows, an individual’s ability to learn language over time diminishes, as the brain becomes less malleable and retention ability lessens. Thus, the best time to ensure that one can learn many languages is at a very early age. The same study also states that though the critical period hypothesis originally was proposed for spoken language, the same can be said for sign language. It can be agreed, however, that it is much easier to teach an infant that is unable to talk how to make specific hand gestures than it is to teach them how to speak. Thus, it can be assumed that simple signs are easier to teach than simple words. The same study also found that learning ASL had profound effects on “all levels of linguistic structure and are greater for first as compared to second language acquisition,” further stating that native learners of ASL – those that had been taught since birth – were more able to comprehend scenarios signed in both ASL and in Pidgin Signed English than those that had learned at ages 9-16 (normative learners). In addition, critical period effects have been found “on all measures of language comprehension examined to date, namely, working memory, narrative comprehension, sentence memory and interpretation, and on-line grammatical processing.”

My personal experience in learning ASL I feel would corroborate many of the findings of these researchers, as it was the very first language my parents taught me before I was implanted with a cochlear implant at age two and a half. One may be thinking: “How is it possible for an infant to learn an entire language?” American Sign Language is a legitimate language, complete with grammar, syntax, and all the other components languages possess, so indeed it is not. My parents instead taught me baby sign language. Defined as “a specialized sign language used to communicate with preverbal infants and toddlers,” it is believed that, amidst a host of other benefits (read the article! It’s quite fascinating), the ability to sign basic words “could prove helpful in boosting communication and providing a ‘bridge to the spoken word.'” It may also facilitate the acquisition of verbal and written forms of communication later on. This is why I do feel as if my fluency in English and my almost flawless speaking voice (in comparison to those of other deaf people) is due in part to being taught a language at such an early age –  I also reached college reading level when I was in second grade, and went on to win speaking contests. Of course, success varies depending on the person in question (environment, disposition, disability, etc.), but I have always felt that my fluency in ASL, English, and Braille are all due in a big part to my exposure when I was an infant. Presently, more than 80% of children that are born deaf are implanted. Many are implanted in their earlier years, the earliest permissible age being (in the US) 12 months of age. Those that are not implanted until later, and even some that are implanted early (as success is highly variable), do not receive exposure to language. According to this article, “children who have not acquired a first language in the early years might never be completely fluent in any language,” and subsequent development of such cognitive activities as literacy, memory organization, and number manipulation would most probably be stunted. Early exposure to ASL for deaf children can sometimes be vital. This is not to say that only deaf children benefit – as I stated earlier, hearing children receive numerous benefits as well.

The consensus of every single source I came across confirmed my suspicions – early exposure to American Sign Language indeed does enable individuals to more easily learn additional languages and retain the information. Those that do not are certainly not unable to do so, but would be required to put in more hard work, and are much more likely not to retain as much of the newly-learned languages as those that learn ASL early. I am thrilled with the results I found in conducting research, and have gained an even more profound love and appreciation for the very first language I ever learned – American Sign Language.