Most of the world has moved to virtual communication during these times of social distancing. Whether you’re working from home, visiting the doctor via telehealth, engaging in distance learning, or keeping in touch with family and friends, you’re most likely using some sort of virtual communication.

Luckily, we live in an age where we have various virtual platforms. Much communication can be done over the phone where we can hear what other people are saying. Another portion of communication can be done via video calls such as FaceTime, Duo, Zoom, Houseparty, etc. where you can not only hear what other people are saying, but you can also see their facial expressions and sometimes body language. The last way we are virtually communicating, and probably the way we most frequently communicate, is via text. Whether you are texting, emailing, posting on social media, typing into a chat with a doctor/counselor or on a forum, you are using text communication.

Virtual communication is extremely convenient; however, it has its disadvantages. Sometimes there’s background noise that makes it difficult to hear the person talking, or the reception is bad, or we ourselves are having a hard time hearing what someone is saying. Video calls have an advantage in that you can see the person(s) to interpret their facial expressions and occasional body language. Text communication is drastically different though. You aren’t hearing what the person is saying with your own ears and you aren’t seeing the person’s facial expressions and body language with your own eyes.

Think about reading. When you read you hear a voice that you’ve made up. You can’t see what’s happening, but you can visualize what’s going on through imagery. We are able to construct all of this based on our understanding of language, sentence structure, syntax, semantics, grammar, and our prior experiences.

Now think about SMS Text language. The language we all used in middle school because we had phones where you had to press the buttons a million times in order to say what you wanted to. It was easier to tell mom “OMW” rather than “On my way” when leaving a friend’s house. Maybe a friend asked if you wanted to hang out “L8R” rather than “later.” Text with people we know is interpreted differently than text with people we aren’t as familiar with. We tend to send more emojis when we’re trying to place emphasis.

In a study by Neuforn and Drinck, students in virtual learning environments were assessed for learning motivation based on the participants’ individual perceptions of written communication. They found that there were four important categories of a message: the appearance, the syntax, the vocabulary, and the empathetic communication. 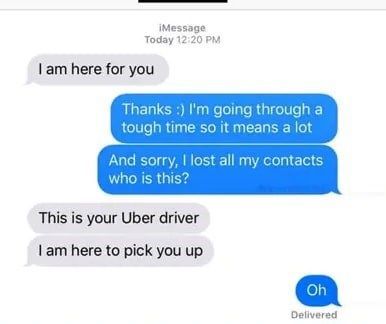 It’s important to remember, as we continue to virtually communicate, that the way we write something might not be interpreted the way we intended for it to be. There are times when things we say that people hear with their ears is misinterpreted. No matter how old the person(s) you are communicating with are, if they don’t know you super well, they might not take your sarcastic comment with four question marks very sarcastically. They may in fact, think you are being rather rude. Think about the audience you are talking to or aiming to talk to in addition to what you’re trying to say, and never respond when you’re angry.

Working for an ABA Therapy company means being a healthcare worker and continuing to work through this pandemic. Despite the kids I work with being out of school and not having a normal schedule, me showing up for therapy sessions still provides them some sense of normalcy. For one of my kids, part of therapy is working on memory recall. This kid is in their teens and has a very interesting memory; at least I think so. They are able to recall events that happened a long time ago, weeks to years in the past, when the event either had a major impact on them (understandable) or something trivial happened, such as someone tripped over a curb. On the other hand, this teen has difficulty recalling events when given a retrieval cue, such as asking what they did last week/yesterday/earlier in the day. For instance, we set weekly goals and every week we go over if the prior week’s goal was met or not. When we went over last week’s goal and they were telling me why they did not meet the goal, I became extremely confused. Once I started following along, I realized they were explaining why they did not meet the week befores’ goal. I was able to help them figure out why they didn’t complete last week’s goal by breaking down a series of questions I had formed (from being confused) into yes/no questions. Simplifying the questions seemed to make it much easier for them to provide a more accurate answer. Also, having a parent present to help confirm things was a big help!

Since I am still relatively new to the field, I’m not sure what the literature says about the relation between recall and ASD. After learning about memory in this class and experiencing similar recall trouble with another client, I wanted to look further into it. As someone who works with people who are diagnosed with ASD, I find this research extremely interesting. I’m so happy to have found a class that relates to everyday life and that I can actually apply in life. I think without this class, I still would find this teen’s memory interesting, but I don’t think I would have known what to look up nor would I have understood what I was reading about.

For example, a teacher holds up a crayon for a group of kids and tells them it’s red by saying “What color? (slight pause) Red.” This is done with various other stimuli over time, teaching the kids the color red, and reinforcing when they say “red.” When the prompt of the teacher providing the answer fades over time, the kids are able to respond to the question with the correct answer of “red.” This group of kids are taught the color red with the same stimuli, and are able to identify new stimuli when presented in an array of other colors. All the kids identify the same stimuli as being red when presented with the array.

This makes sense, but do people who are taught to identify red with different stimuli see red as something else? What if I took what I was taught to be blue and taught a group of kids learning their colors that it was pink?

While I’ve always wondered about this topic, and I recently experienced a situation which brought my question to life. I was working with a client who was trying to pull a red piece to a board game out of a clear bag for me. They had already pulled out the other colors and two of the red pieces, leaving one red piece and four green pieces. My client kept missing the red piece and for a moment I wondered if they had some sort of visual depth and motor dysfunction like apraxia. Next, they pulled out all the pieces, held their hand out to me and asked if the pieces were red and green. I asked them if the pieces all looked the same, to which they said yes,but they thought certain ones were red and others were green and then pointed them out to me. They were correct as they had pointed out the pieces I knew to be red and green. I asked them to look at some pictures and pulled up images typically used to test for red/green colorblindness. 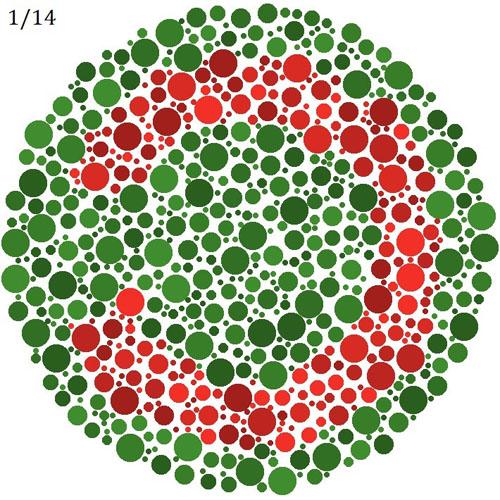 After doing some research, people see color differently because of the cones in their eyes. Whoa! It’s like we talked about that in class or something… It is, however, way more complex than what we have covered. Those with typical color vision (trichromats) tend to prefer blue hues the most and yellow-green hues the least, but that is not always the case. There are also two categories of red-green dichromatic vision: protanopes and deuteranopes. Protanopes perceive red as a darker-yellows and deuteranopes perceive red as lighter-yellows, however they both prefer saturated yellows. 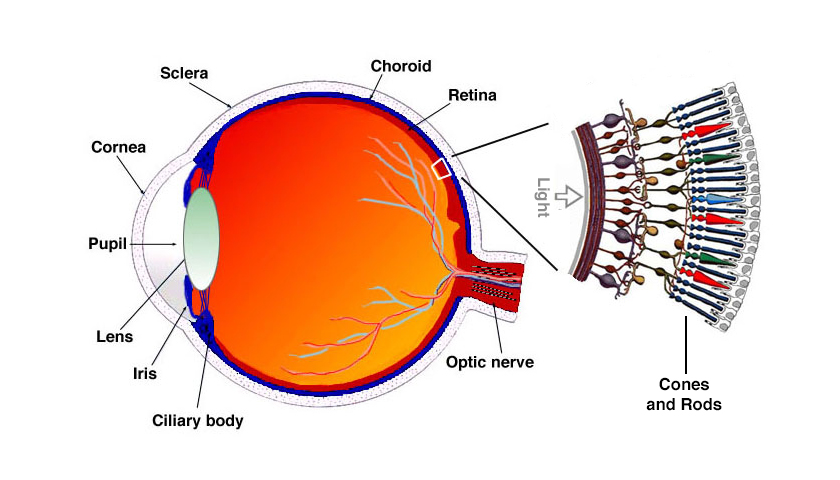 While top-down processing works its magic by telling us what is what based off of what’s been taught and experienced, bottom-up processing tells us what we like and dislike when it comes to color based off what information is being processed through the cones in our eyes. So, while we are taught to identify something such as color the same way, we have the cones in our eyes and bottom-up processing to thank for making our preferences different and even unique.

Starting from a young age, routines are ingrained in everyday life. You go to school, go to your classroom, and then learn about the same subjects in a particular order throughout the day. Then you come home, maybe go to sports practices, eat dinner, take care of chores and responsibilities, and your homework gets done in the same spot every day; for me it was at the kitchen table. From childhood, we have usually been taught to study and do our homework in a quiet and distraction-free space, which for most people, means finding one consistent spot in their house.

While I was t aking my course to become a Registered Behavior Technician (RBT) for Applied Behavior Analysis (ABA) therapy, I found this age-old advice to be wrong. The course and the behavior analysts I work with have constantly emphasized the importance of running trials in various settings to increase generalization in a child’s learning. This new knowledge made complete sense to me; you work to teach the basics of life skills and these skills need to become generalized so that the kids can go to school, make friends, ask for help, etc…. Sessions also require a lot of movement to allow kids to interact with each other and do different things, but you have to work on their programs, so why not continue regardless of what room you’re in?

This all made sense to me until I thought about it in the context of learning. I teach kids in different settings, but why was I not taught to do homework or study in different settings? An article in the New York Times, “Forget What You Know About Good Study Habits”, summarizes a study in which one group of college students studied vocabulary words once in two different rooms, and another group studied the same vocabulary words twice in one room. Both groups of students were tested, and the group that studied in both rooms performed better than the group that studied twice in the same room.

The question remains: why does it matter where you study? We were always told to study in a quiet, distraction-free space because that’s the closest we could get to a testing environment when we weren’t taking a test. This makes sense, but why does the location matter? According to the article, the brain is always making subtle associations between what you’re studying and what’s happening in the environment around you; however, when you vary the environment and hold the information constant, the information is able to make stronger connections. This is because the brain is not trying to make connections between the same information and the same environment every time you study. Similarly, varying the type of material seems to result in stronger connections than studying one skill at a time. So, if you prefer that one corner desk in the library, it’s worth switching it up to a different desk or a different corner when studying for that next test.