In this blog post I am going to explain repressed memories and how the popular Netflix show Dexter used them. Repressed memories happen when a person experiences a traumatic, extremely emotional, or stressful event. This event is then encoded as an episodic memory. Because this memory creates a large amount of discomfort it is believed that we block it out as a psychological coping mechanism. Forgetting about the event is an active process. We reroute the pathway to this memory so that it is difficult to reach consciously. It is also believed that we block it out because it would create extreme emotions (anger, depression etc.). If someone had a repressed memory they wouldn’t know it because the whole point of a repressed memory is that you forget it. This makes a repressed memory very hard to diagnose. However, eventually repressed memories are able to be identified through development of other psychological problems like depression, PTSD, disassociative disorder and anxiety.

A study showed that extra synaptic GABA receptors in the brain help encode memories of fear inducing events and store them where they can’t be consciously recalled. These receptors are only activated during a traumatic event. When the brain isn’t in this stressful state the same pathways can’t be used making it so that you can’t recall the memory. They tested their theory on mice by infusing the hippocampus of the mice with a drug that activates the extra synaptic GABA receptors. While they were in this brain state they were on a box and given a mild shock. The next day when the mice were returned to the block and their brains were in their normal state and they were not afraid. However, when the scientists gave them the drug again they became afraid of the block. This supported the theory that the two different brain states encoded memories differently. 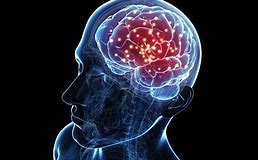 In the popular Netflix series Dexter they use repressed memory to explain the main characters childhood and why he doesn’t remember what happened to his birth mother before being adopted. Spoiler alert! The show Dexter is about a man that works for the LA police department as a scientist and helps investigate murders. What his coworkers are not aware of is that Dexter uses the resources of the police department to find murderers secretly and kill them. In one episode of the show he goes to investigate a murder scene and it acts as a very specific retrieval cue for him to remember a repressed memory. All the sudden the show has you witness him remembering the traumatic event of his mother being killed. They use this repressed memory to explain why he kills people. I think while they sort of got the idea of repressed memories right, but they could have done it better. I definitely don’t believe repressed memories leads to murdering people.

All together I think that repressed memories are very interesting especially on the neurological level. However it is greatly disputed on its legitimacy and after all the research I did I am completely torn. Do you believe in repressed memories?