Body Dysmorphic Disorder, or BDD, is a “body-image disorder characterized by persistent 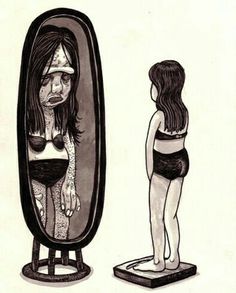 and intrusive preoccupations with an imagined or slight defect in one’s appearance”. See here for an expanded definition as well as signs, symptoms, and co-morbidity: https://adaa.org/understanding-anxiety/related-illnesses/other-related-conditions/body-dysmorphic-disorder-bdd. For those of you who have experienced this, it can be very strange. Most of the time you feel completely fine. Then, something happens to change your entire view of yourself, leaving you questioning your ability to perceive.

I have memories of holding up pairs of pants and thinking there’s no way these are going to fit me and then having them slide right on. One time, I was trying to convince my friend that in the first few months of her new job she had gotten so much narrower than I was. She put one hand on my stomach and one on my back and slid them out so I could see. I was so convinced that she had measured wrong or made a mistake because I was positive I was not that size. Some days my hands look huge and some days they look tiny. My dad and I have a joke about

whether it’s a “big hand day” or a “little hand day”. It can be very disconcerting to realize you have no idea what you actually look like.

In trying to find a good topic for this blog post, I somehow came across an article about cognitive deficiencies in people with BDD compared to those with OCD and healthy individuals. The study used RBANS (a comprehensive neuropsychological test) to measure things like memory, visuospatial construction, attention, and language among other things. It was kind of alarming to hear that those with BDD struggled significantly in areas of memory, attention, and story recall. https://www-sciencedirect-com.umw.idm.oclc.org/science/article/pii/S0165178115004096.

Several other studies have showed similar findings. This study found deficiencies in neuroperformance skills such as reaction time, extra-dimensional shift tasks, and decision-making. They suggest cognitive inflexibility as one of the possible causes for these results as well as overall impulse control and affective processing. They describe these causes in correlation with OCD patients and those who have both BDD and OCD. It is an interesting study, worth a read https://www.ncbi.nlm.nih.gov/pmc/articles/PMC5322826/.

But why does this happen? I had always correlated BDD with anxiety and OCD in my head but never really thought about what caused people to actually see things that were not there. Is there a neurological reason that people with BDD can’t trust their perception?

Well, as you may have guessed from the title of this post, there is! There has been success in using serotonin reuptake inhibitors in BDD patients, suggesting that they may have a deficiency in serotonin. However, no results have been causal. The exciting findings come from brain image studies. A test of facial processing showed that individuals with BDD showed a more detailed processing system in their left hemisphere, as opposed to healthy individuals who processed at a more general right hemisphere level. These results were correlated with symptom severity as well. BDD participants were also faster at recognizing upside down faces, suggesting they have superior detail processing capabilities.

Further small-scale studies have suggested physical differences in brains of those with BDD, not just how they use them. There is some evidence that both females and males with BDD have more white matter and smaller right orbitofrontal cortices and left anterior cingulated cortices. There is also some evidence of reduced integrity of white matter “wiring” that would help explain visual, emotional, and information processing impairments in BDD patients. https://bdd.iocdf.org/professionals/neurobiology-of-bdd/

Unfortunately BDD is a relatively unrecognized and unstudied disorder on it’s own. It is generally studied in relation to other mental disorders, most prevalently OCD. These neuro-imaging studies, while intriguing, are few and inconsistent. I hope in the future there will be more research into the cognitive and neuropsychological reasons behind BDD itself. For now, if you are interested in the current literature, there are several studies on co-morbidity with OCD https://www.ncbi.nlm.nih.gov/pubmed/26345330, sexuality, impulsivity, and addiction https://www.ncbi.nlm.nih.gov/pmc/articles/PMC6420059/.

5 thoughts on “Cognitive Effects and Neuropsychology of Body Dysmorphic Disorder”